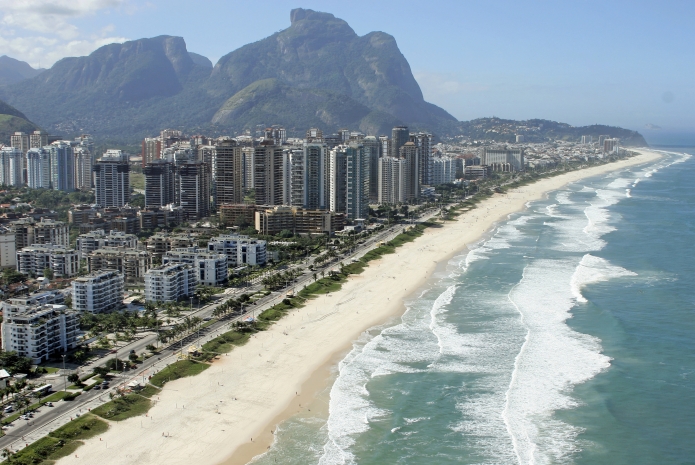 It took just five days to wrap up this year’s Billabong Pro Rio, all over before anyone could ask exactly why it wasn’t held at a left called Sao Conrado that was reportedly serving up the goods. The reason? Pollution running into the water from a favela apparently. So with small swell window the event was squeezed into the first few days of it starting, at an uninspiring beach called Barra da Tijuca. Despite the far from perfect waves Kelly managed to wow the crowd, and the Brazilian contingent left disappointed with all their hopes quickly dashed in the round stages.

Michel Bourez, the Tahitain charger who has already won one other WCT event this season, made the most of the chunky beach break waves and tasted the sweet champagne on the number one podium spot. Bourez knocked out the defending champion South African Jordy Smith in the quarter finals, Australian Taj Burrow in the semis, and Californian Kolohe Andino in the finals, adapting to the unpredictable waves expertly. His win at Margaret River earlier this year now means he has won two of the four WCT events so far this season.

Australian Sally Fitzgibbons won the Rio Women’s Pro, continuing her impressive performance so far this season and taking down the current WCT Women’s number one Carissa Moore in the finals. Fitzgibbons still has some work to do to catch up with Moore, who leads by a margin of 6,300 points in the Women’s WCT rankings.

The only Brazilian surfer in the competition to make it past the third round was Adriano De Souza, whose performance looked promising as he progressed into round 5. Facing Slater in the first heat of the round, the thought of his opponent scoring a perfect 10 in the unpredictable lacklustre waves was no doubt far from De Souza’s mind. He was probably quietly confident, considering he has enjoyed a good run of beating Slater in previous competitions. After the heat Slater said, “He’s been killing me — I think he won six in a row against me before today. I’ve had enough of losing to that guy for now.”

Kelly pulled into a dredging low tide back-cracker of a wave, his first wave of the heat and the only wave that really mattered. It was the only perfect 10 of the Billabong Pro Rio, and with it ended the Brazilian spectators last chance of seeing one of their fellow countrymen compete in the finals.

Brazilian Gabriel Medina suffered a drop down to 5th after only surfing in the first three rounds of the competition, losing his 1st place WCT ranking in his home country. Kelly managed to become leader of the pack with 1st place in the rankings thanks to a great performance in Rio, and Bourez also climbed to 4th place. But the biggest jump in the rankings came from Koholhe Andino, who battled with Bourez in the final, his first WCT final, and enjoyed a jump of nine places up to 12th. Fanning was throwing our airs in the first heats, a sure sign of being under pressure, and dropped down to 8th from 3rd.

Over to the women’s, where Carissa Moore still maintains her lead, but Sally Fitzgibbons is snapping at her heels. Winning at Rio propelled Fitzgibbons from 4th to 2nd, and Stephanie Gilmore, the five-time world champion, was pushed down to 4th place. Watch all the action from the final day of the Billabong Rio Pro below, including Slater’s ten-pointer again!

So that’s it for the WCT this month, a couple of weeks before the Fiji Pro at Tavarua starts and no doubt all the surfers are looking forward to surfing some magical waves in the Pacific Ocean. For the women’s this is a new event for them, so keep an eye on how far the girls will go to impress.