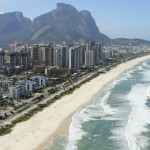 It took just five days to wrap up this year’s Billabong Pro Rio, all over before anyone could ask exactly why it wasn’t held at a left called Sao Conrado that was reportedly serving up the goods. The reason? Pollution running into the water from a favela apparently. So with small swell window the event was squeezed into the first few days of it starting, at an uninspiring beach … END_OF_DOCUMENT_TOKEN_TO_BE_REPLACED