While heading off to some secluded surf spot to score empty waves is always on a surfers mind, enjoying the cultural and entertainment delights of a city and getting waves at the same time is a blast. There aren’t hundreds of great cities where men and women leave their jobs in the office to end up in the surf half an hour later, but Sydney is one of them. Some of the world’s best surfers have come out of Australia’s largest city, the likes of 1983-84 world champion Tom Carroll, 1999 world champion Mark Occhilupo, big wave charger Koby Abberton, and 7 time women’s world champion Layne Beachley.

North or South? Bondi and Manly 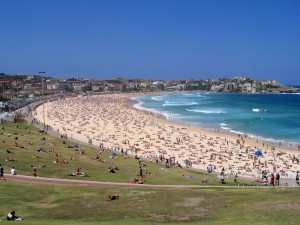 Either side of the city centre, the Sydney Opera House and one of the most impressive natural harbours in the world are two beaches that each offer something different to the travelling surfer. Australia’s most famous beach is Bondi, just south of the harbour, sucking up any south swell going. One catch. Every man, woman, child and their dog surf here, so unless you’re up for surfing shoulder to shoulder everyday just have the one session here and move on. On the other side of the harbour is Manly beach, slightly smaller and better for swells coming from the north. A popular and busy beach that is the lesser of two evils when Manly and Bondi are compared. These two beaches give a crowded taste of what is waiting either side of them, so lets move on.

Depending on what you’re after surf wise Sydney pretty much spoils you for choice. Beach breaks, reef breaks, point breaks, and big wave spots. As you head further north or south from central Sydney the crowds begin to thin out, and it is not unheard to find a peak to surf alone. 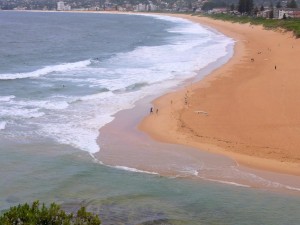 One of the largest stretches of sand Sydney has to offer, Narrabeen is a sweeping crescent bay that is a welcome change from the crowds of Bondi and Manly. A reliable surf spot that really serves up the goods on a swell coming from the south or east. North Narrabeen is where the best action is to be had, but also where the local rippers will be shredding so expect some hassle over waves. Head south and as the waves lower in quality so do the crowds. Take a stroll and make a compromise to get the most out a session here.

Not the most consistent surf break, but when a big southerly swell hits Sydney the big rights that peel off from in front of the sea water swimming pool are epic. It gets especially good in the winter, so you’ll want to pack a 2-3mm wetsuit to protect you from the cold, and the rocks if you wipeout!

If taking on an insanely hollow double overhead wave breaking onto a sharp rock ledge into 2 metre deep water floats your boat, then Cape Solander is for you. A favourite spot for bodyboarders, the wave here is for experts only. South of central Sydney, head to Kamay Botany Bay National Park and follow the sign for Cape Solander. There is no easy way in or out to this wave, unless you have a jet-ski of course. Red Bull stage an invite only competition here called ‘Cape Fear’. To see what the hype is about check out the video below.

The surf breaks Fairy Bower and Winki Pop are by the headland close to Manly Beach, to the right when looking out to sea, and you’ll see droves of surfers heading there when it’s on. They are reef breaks, the same spot just split into a few different breaks, ending with Racetracks that finally shoulders and dies into the deep water of the neighbouring bay. Really throws up of the rocks and offers fast barrels for those brave enough to tuck into them. An awesome reef break very close to Sydney’s central district, watch the video to see it in action.

Accommodation in Sydney is very expensive, so if you’re used to splurging you’ll be right a home here. For travelling surfers on a budget there are a few options, like bunking up in a hostel and couch surfing. You’ll find hostels next to many of the best surfing beaches and breaks, and the Sydney YHA Backpackers is a great place to begin when it comes to the cheapest accommodation in the city, so check-in here and start exploring!