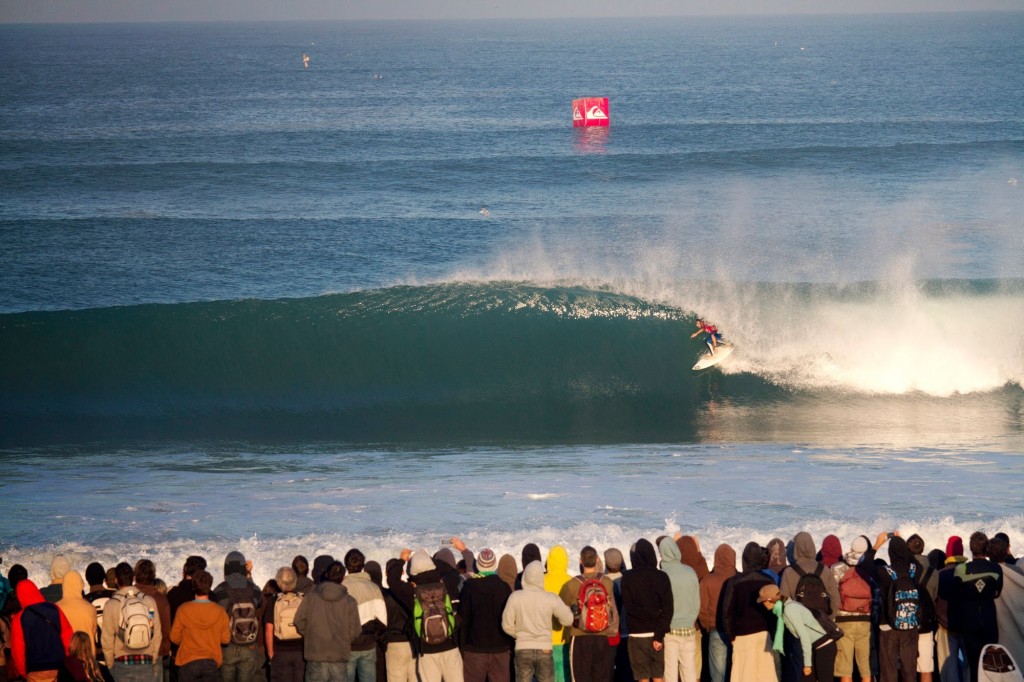 Somehow the French leg of the World Tour always seems to serve up the goods, and at this year was no different at the Quiksilver Pro France. The men and women were treated to a range of different conditions to really keep things mixed up and unpredictable, from punchy shoulder high waves to double overhead monsters. The heavy beach break barrels of Siegnosse and Hossegor are the surfing jewels of the Basque Country coast in Southwest France, and the world’s best surfers took full advantage of the empty line-up.

John John Stamps His Name on the French Champions Board

Nobody could have guessed how the men’s contest would go down, with so many of the favourites and highest ranked surfers going out early. Last year’s champ Mick Fanning out in Round 5, and the two highest ranked surfers in the ASP shut down in the quarters by surfers trailing below the top ten. A building swell sent 8 to 10 foot waves thundering onto the beach at Hossegor, and the stage was set for the final, a showdown between Hawaii and Brazil.

Predicting the final being John John Florence versus Jadson Andre would have had great odds at the start of the competition. For Jadson, 13th and 25th have been his placings in all competitions so far this year, so making a final was a first for him. John John has made a couple of semis and a quarter, but it’s taken him some time for him to come into his own on this tour.

Jadson momentarily took the lead on his first wave, but after John John’s second wave his fate was sealed. The jet-skis ferried the pair out back between waves, making for some intense quick fire waves and deep barrel riding. Wave selection was key, with John John snatching some bombs and Jadson shut down by some close outs. The final scores were John John 16.00, Jadson 4.57, but watch the final highlights to really see how it went down.

Aussie ripper Tyler Wright really took her game to the final against American Courtney Conlogue, who missed out on three competitions this year because of an injury. Solid clean 4 foot surf greeted the two, but within the first ten minutes of the final heat Wright had notched up three 9 point waves, leaving little room for a comeback from Conlogue. The train didn’t stop there for Tyler though, and a fourth 9-pointer gave her a final score of 19.20. Too much to beat for Courtney, she gave it her all and ended with a 12.43. To see Tyler’s insane run of 9-pointers check out the video below.

The Title Race Heats Up

With just two events left on the World Tour the title race is still open, but the possible results are narrowing. As for the women’s rankings, after such a strong start to the season Hawaiian favourite Carissa Moore has dropped back into 4th, while 5-time world champ Stephanie Gilmore has jumped up to 1st.

Now over to the men’s, where the likelihood of the first Brazilian surfing world champion is increasing by the day, with Medina staying consistent and sitting pretty with three contest wins this season. Slater, with his decades of professional surfing experience, is sure to capitalise on any mistakes made by Medina, but will the Brazilian wonder kid make any?