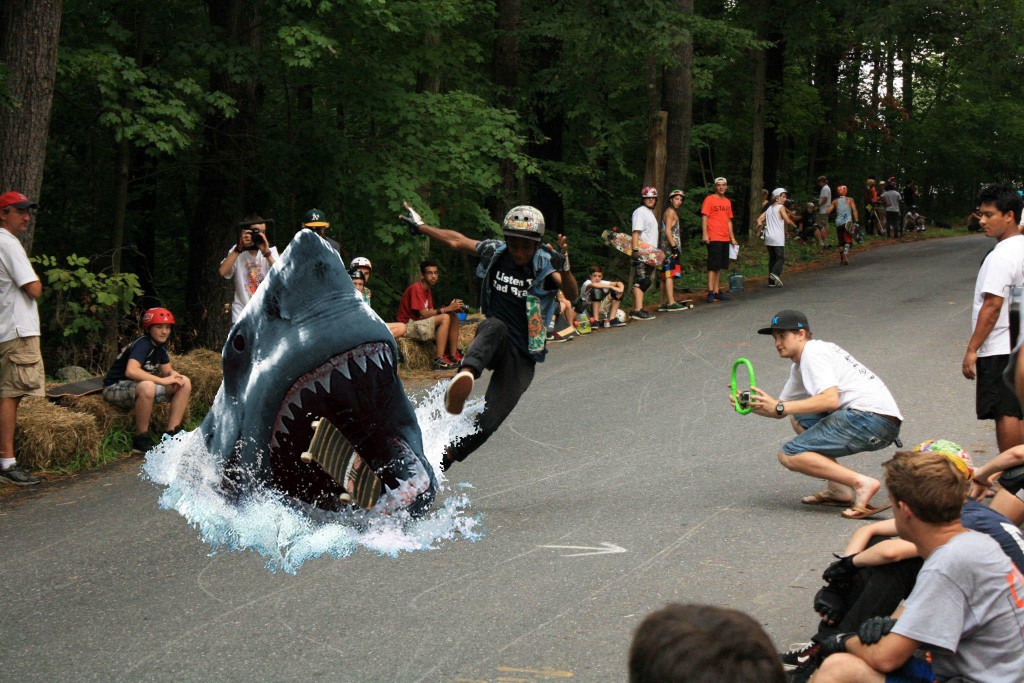 The beauty of skateboarding and surfing comes from conquering the potential dangers involved with style and finesse – they are extreme sports after all. The more radical and risky the maneuver is, the more awesome it is if completed. But what are the dangers of both these sports? Are you at risk of injury by merely stepping on the board? The truth is that both sports share certain dangers but can be avoided by taking the necessary steps. Lets break down the individual risks associated with both boards.

Skateboarding
You’ll often see children learning to ride their skateboard with protective pads covering nearly every inch of their bodies. Though highly unnecessary for learning, they give parents peace of mind. Truthfully, the most valuable piece of equipment in skateboarding is the helmet, because you typically skateboard on concrete or hardwood. For beginning street skaters, the best way to keep yourself safe is by making thoughtful decisions. While this seems silly, I highly recommend attempting an ollie off of the three-stair before you attempt the five-stair. Taking risks is a good thing when you are trying to improve your skills, but jumping the gun and attempting something you yourself don’t even think is possible, might not be the best idea. Smart skateboarding is definitely the safest. That all being said, there are few skaters who won’t agree that getting some cuts, bumps, and bruises from skating is a good thing – helps toughen you up.
Vert skating, or skating large scale ramps, is probably the most dangerous. For this type, elbow and knee pads are recommended in case of a fall. It is helpful to tighten the trucks on the skateboard in order to maximize stability for vert skating, but it also to make your skateboard a little safer when you are a beginner.

Surfing
The greatest risk involved in surfing is not surfing itself, but it is the ocean. Many people believe they know how to keep themselves safe in the ocean, without any real knowledge of currents or wave safety. One helpful way to keep yourself safe is learning about the beach before you even go in the water. I once surfed Salmon Creek, north of San Francisco, went back to the surf shop to return my board after the sesh, and learned that someone had been bitten in half by a great white shark just a year ago in that exact break (like I said, know the beach before you go in). Talk to locals about strong currents near the waves, and figure out what spots to avoid. Assuming you’ve talked to no one about the beach and you have zero information on the break, the best way to avoid dangerous conditions is by simply watching the break for a couple minutes. This will help you determine where you want to paddle out, and where to go to catch the wave at the perfect break point. You should consider yourself a very strong swimmer before you try to tackle some overhead waves, because you never know when you will have to swim your way out of a difficult situation.

As for sharks, there isn’t much you can do other than avoid beaches that have been known for shark sightings. Surfing with a partner is at least reducing your risk of getting attacked by fifty percent.

Ultimately, most people are aware that risks are associated with these two extreme sports, because it is often the reason that people try to learn them anyway. There is a risk of getting hurt every time you step on either board, but by taking necessary precaution, you are eliminating many possibilities of making trivial mistakes. Just watch out for the sharks.